skip to main | skip to sidebar

SKIES
Posted by PERMANENT DIRT at 12:31 AM 2 comments:

BAGS BAGS BAGS THEY ARE VERY USEFUL THINGS IF WE DIDN'T HAVE BAGS TO PUT SOUP IN TO RUIN IRIVERS THEREIN
Posted by PERMANENT DIRT at 3:33 AM 1 comment: 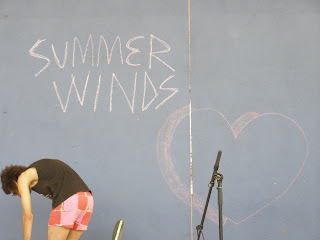 8008 (NO WEAVE)
8008 begins summerwinds 09 with fashionably delayed, distorted and done guitar in what was asimilar to hendrix performing star spangled banner. Second check box checked when he puts down the guitar after 10 or so minutes to play a saxophone in the very same way. Bit overblown I guess.. PS. For the first couple of acts I wasn't aware my iriver had any battery power at all, so there were no recordings of the first couple of acts. Fifteen minutes.
GS 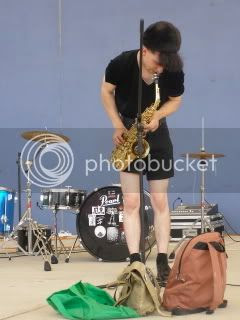 This Party Sucks consists of two ex Queenslanders sharing guitar/drum/vocal duties, lending each others musical strengths unto one accurate depiction of what it would be like if one combined Gutters and Nite School. The set starts with Hannah on guitar/vocals, with Andrea drumming. So familiar territory given their backgrounds. Songs were pretty basic, limited to blocky bar-the-same-fret power chords, drums the usual 4/4 beat. Vocals good though. Fun. Ten Minutes.
GS 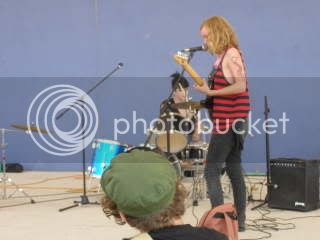 Laying pensive on the ground stretched over a bulky Synth, Matthew Brown's set starts with harmonising chords creating a moody atmosphere. Sparse notes devour the chords, in a precise manner. Called a Synth master by peers, Matthew's performance is driven and seemingly planned - which unlike most Synth based performances has a direction which lends it to being interesting, well thought out and controlled. Eighteen minutes.
MSC 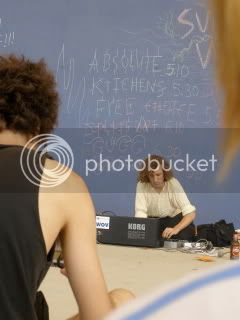 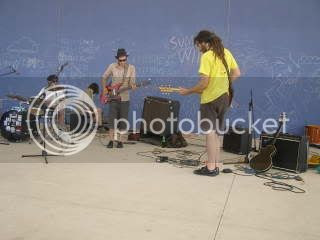 No News are from sydney, are an acoustic guitar, low nonchalant vocals and the barest percussion. They open with what is announced as a wasted sperm cover, being summerwinds.
No News were really likable, they only played three songs but it was really good. Eight minutes.
GS 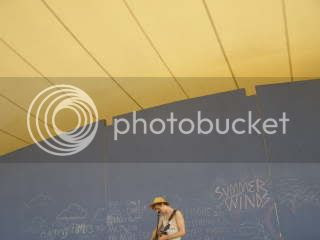 http://www.mediafire.com/?zfiyl3zw3ex
Acid Casualty are Mai, Lei and Hannah. Much like this party sucks, Hannah makes a swap with Lei halfway through, only this time theres a more distinct change in style, given their differing guitar styles. They play four songs, with Lei fronting the band for the first two and Hannah the second two. The first two are pretty reminscent of me mu, but more straight forward with basic drums. Mai's basslines bounce around the songs playfully, giving the songs an extra level of interest where the bass would usually sit in the background for any other band. Hannah's vocals for the second half were right good. Check it outtttt. First song was really catchy. Ten minutes.
GS 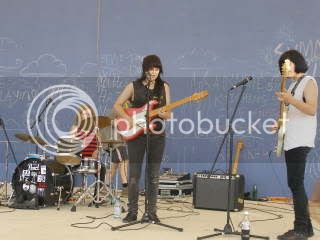 Featuring looped guitar and various keyboard/synths - Super Star's set has a jaunty feel to it, the high short plucky guitar brings a new fresh, interesting face to the normally lacking guitar loop bands. The synth is placed in the background, used as a foundation. The lowfi, buzzing tones gives Super Star the light and shade contrast. Conjured up images of the Willy Wonka boat ride. Twenty Minutes.
MSC 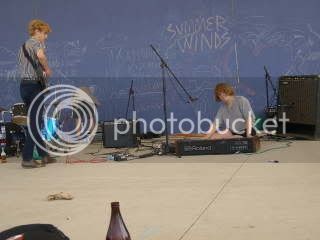 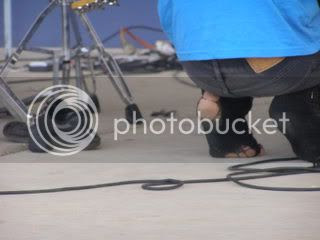 ABSOLUTEN CALFUETRAIL (SELF HELP GURU)
We missed this set BUT we did catch him some days prior doing a set with Ben Andrews. Set was brutal, Mark addresses audience with a piece taken from a corporate guidebook or something to that effect, in a confronting manner through waves of aggressive effects. Power electronics aswell, yes. Best part was when they stopped at the same time.
GS
KITCHEN'S FLOOR (BIAS)
http://www.mediafire.com/?mfmh4mztjh4 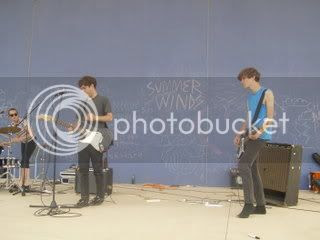 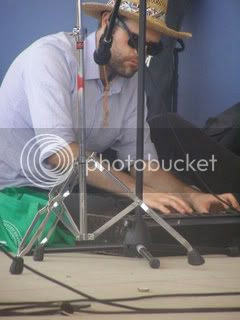 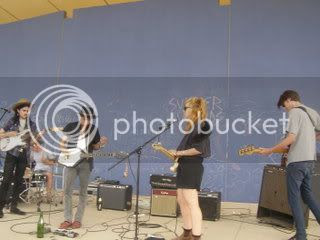 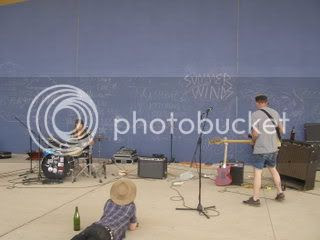 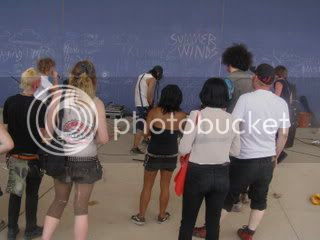 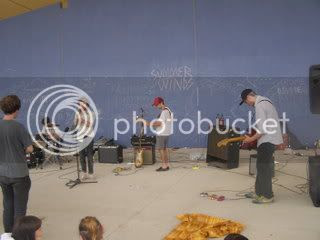 CHROME DOME (HEADLINERS COKE BLOAT)
http://www.mediafire.com/?mmtgmmmzja5
Shaun and Ben's "synth punk" band, features Shaun on synth, vocals and Ben on ( ? ). Shaun is a hype-man, pulling "smooth moves" with a smug look on his face - over the incredibly loud, drowning and swooning music. The set is reminiscent of the Prodigy at the Big Day Out, only 100 times lazier and not as many fans. Shaun's persona as the charismatic music maker is entertaining but not as entertaining as Ben's involvement in the band.  Thirty minutes.
MSC 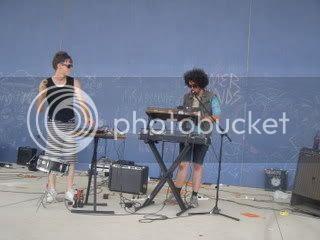 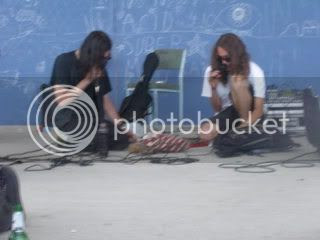 BUM CREEK (CIRCUS BAND)
http://www.mediafire.com/?myvoq1oikym
The spectacle of the band was more memorable than the music. Music was looped differing electronic instruments. With all members charismatic and involving themselves fully in the music, whether running around playing different instruments or throwing streamers. Totally party atmosphere. Twenty minutes.
MSC 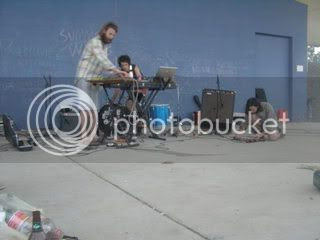 SPLIT FOOT (WHIMSICAL SAVAGES)
http://www.mediafire.com/?mamkcqzetyw
Another interesting performance from Tara and Rex. Rex's beats aren't as solid as usual but he totally makes up for it with enthusiasm. Tara's guitar and vocals are grating with melodic undertones. Referring to their inebriation and addressing the audience as a group of friends, Tara gets fed up with their lack of togetherness and throws her guitar down, storming off. Thus ending Summer Winds 09'. Sixteen minutes.
MSC
no photographic record! 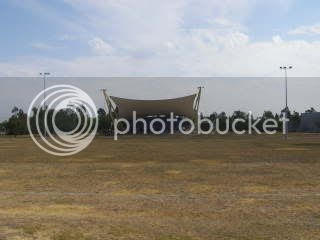 Heartflew tonight were represented by Adam Rogers (I would go as far to say he embodies heartflew), Ryan Potter and Andrew Mclellan. So all as usual save the only sturdy female member, Mac. So tonight was akin to a night out without the girls, a boy's club if you will. Usually around the tail end of the set, Adam gets really frustrated and aggressive, tonight the axis is reversed almost. Faced with equiptment failure in doses, Adam tosses his guitar aside and leaves the stage. Bree of Loomer stops him, and he gets back to the stage, where Bree swaps Adam's faulty keyboard with her own. Only still, the momentum of the set before this is dashed with an uneasy feeling of whether the set should have continued. Otherwise pretty exciting. Eighteen minutes.

Open with one of two new songs, songs of which sound more mature than of heard before. First one plods only with a krautrocky-organicness. New bassist Pat adds moreso to the melodic side of their sound with an octave thing there und there. Second new song sounded a bit like Deerhunter. Bree's vocals were a little lazy during the first half, but the rest was good. She let loose and moved around ETC. Harry passed out at the end. Twenty minutes.

Posted by PERMANENT DIRT at 4:59 PM No comments:

KITTEN PARTY (PAW TRACKS MEETS AUDIOPOLLEN)
http://www.mediafire.com/?q0m3zmmzwmz
Kitten Party is one Rohan, master of avant expression. Every set I've witnessed has been different, and tonight's set is no different. TO INDIFFERENCE. He begins his set with the proclamation that his tonight is part musically sampled from popular band Animal Collective. Sample itself is further distorted when at Rohan's disposal. The 16-17 year olds gathered stay and leave in pairs, thoughround the tail end of the set they embrace Kitten Party, for a short time.One heard saying 'Oh don't stop now, I just got used to your noise'. USAGE. Fifteen minutes. 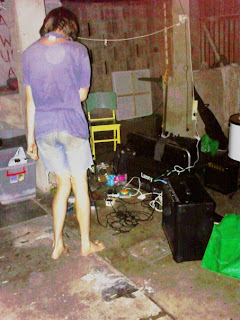 KITCHEN'S FLOOR (ENHANCED BAND)
http://www.mediafire.com/?z0mjmymzfm0
MOVE OVER DA VINCI. Eighteen minutes.
LIMITS (THEORY OF A ROCK BAND)
http://www.mediafire.com/?hjvz32wkjj1
Limits were, was, has been Lachlan, Matt and Julia. Runnin' on the good 'old
days, Limits play two songs, with Lachlan busting out powerchords, Julia
taming every man's bass and Matt on drums. First song was an instrumental
I'm to understand Lachlan wrote, second being a cover of Gun Club's sex beat.
Bass was tuned a semitone down, with the guitar immaculately tuned by tuner.
OOPS. It was their first show but, give them a go. GO. ps Recording turned out
really bad. Ten minutes. 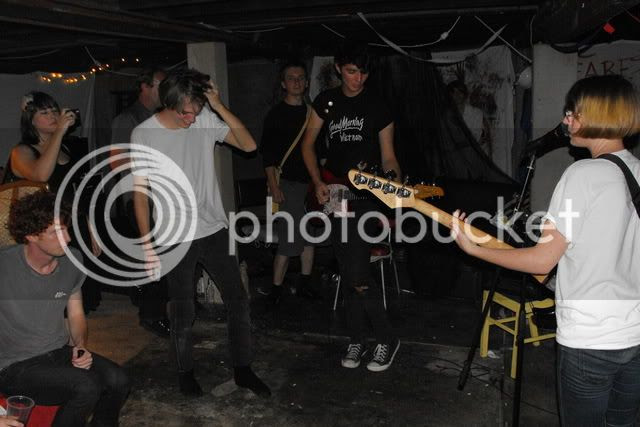 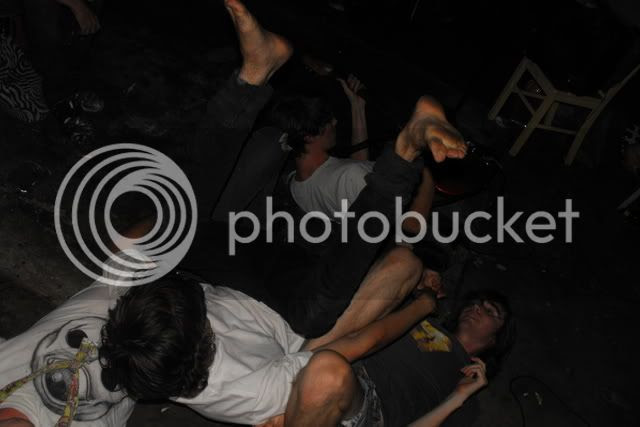 Posted by PERMANENT DIRT at 2:22 AM No comments:

RANDOM RECORDINGS FROM THE PAST TWO MONTHS

Capt. Robbie & the where aren't we Banned?

Interesting wine-soaked accoustic introspective. End is worth sticking around for, I liked the amp's noise piercing through. Accidental noise star. 12mins

Unexpectedly full sound considering the limited sounds he bengins with. Builds up layers using trumpet and some found object light thing which although it had recently destroyed his mixing desk, he decided to push on nonetheless. Nice bicycling music. 13mins

Blank Realm + Mani Neumeirer (I hope I spelled that right...)

I found this combination thrilling to begin with, however I felt that communication between the members was limited, probably due to the small stage at Ric's. The overall performance was good though, Luke's guitar interacting with Mani's drums a highlight. The recording did not turn out well because of the volume, however I will upload when I am able to use someone else's bandwidth.

JN
Posted by PERMANENT DIRT at 4:41 AM No comments:

Set starts with a start-stop yelling, tune. Drums are the highlight within their performance tonight, they are messy and interesting. Guitar is turned down too low and lacks the punch needed to get the audience to their feet. Twenty seven minutes.

RECORDING WILL BE UP SOON.

Glen and Michaela party down like it's already 2009 with their mixture of clean guitar scrapes and floor tom pounding with "nihilistic" undertones. I liked it. Fifteen minutes.

Caught Ship debut tonight, consisting of Ben XYSTER and Pat GARCONS, they use an electronic set-up, slam dunking themselves into the man on man electronic music hoop. Good though! nice delay drenched vocals and dual vocal deliveries through the back entrance mate yeah right on thhroughgh thhere. Eight minutes.

KITCHEN'S FLOOR (BACK TO WORK THEN)

Matt, Julia and Glen begin their set with Ground, the vocals are echoed with the previous effects left on from Caught Ship's set. The performance slowly starts to break down, with the New Years VIBE intoxicating to all members. Described by one (BEN XYSTER, CHEERS) as a stray dog attached to a tight leash, the set was not the tightest but possibly the most entertaining Kitchen's Floor set EVA. I liked it. Twenty eight minutes.

MSC
Posted by PERMANENT DIRT at 1:27 AM No comments: